A downloadable game for Windows

With Music Composition by Graham Southern

KnifeHeart is our attempt to better bridge the gap between competitive, skillful, strategic games and narrative, story-driven games.

Players play as two teenage girls, fighting over the attention of their mutual, non-binary love interest. Gameplay proceeds in alternating phases of visual novel style dialogue exchange and 2D topdown fighting sequences. The dialogue choices available in the visual novel phase are tied to particular personality traits, as well as specific fighting abilities. The choices you make thus determine the qualities of your character both narratively and mechanically.

KnifeHeart also represents another experiment in my exploration of the idea of emergent asymmetry in fighting games. As I've described in other game descriptions on this page, asymmetrical competition I think makes for interesting dynamics where each player must not only understand their own goals, strengths, and weaknesses, but also their opponent's, and evaluate how those differing characteristics interact uniquely in that particular situation. However, most competitive games create most of this asymmetry in a disproportionately impactful, frontloaded decision (selecting your character/race/deck archetype/whatever). This can lead to situations where a player might be at a significant advantage or disadvantage very early on in a game, in some sense before the "real" game has even begun. There's little to no time to react to your opponent's decision, and even if counterpicking is an option in some form, players are often incentivized to devote most of their time learning one character/option well rather than spreading their time across a variety. In KnifeHeart, there are technically 35 different "characters" you could play, but they are built up modularly over the course of the game in a draft-style manner, where you can react and pick accordingly based on your opponent's decisions and playstyle. Players can learn the 7 unique abilities well individually, and then apply and adapt their knowledge to the particular configuration that emerges in each game. 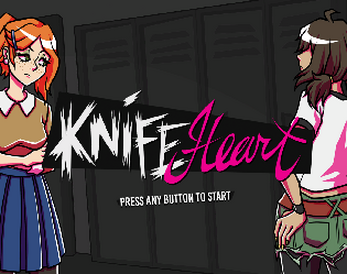