A downloadable game for Windows and macOS

The Gardener is a roguelike deckbuilding game where the player must navigate their way through a hostile forest.

Other games, such as Dream Quest, Slay the Spire, and Meteorfall, have explored the intersection of the roguelike genre with deckbuilding mechanics. In The Gardener, however, there is no separate overworld separating out card-based encounters. Instead, the cards are your means of traversing the space in addition to fighting enemies and collecting new cards. This allows for tactical, grid based play where your decisions are relevant to all aspects of the system. Do you take a detour to collect a new card and risk taking damage or being killed by the enemies, or do you just run straight for the exit? Do you pick a card that helps you defeat enemies more efficiently, or one that gives you more flexibility in your movement?

In each level, you aim to make it to the door without dying. The forest, however,  has other things in mind. After each turn, the forest will take its own turn, playing from its own deck to impede your progress. New plants will grow around you, blocking your path, or threatening your life. Enemies also must navigate around the forest, so a clever player can pit the enemies and the environment against one another to their own benefit.

The Gardener represents one of my first serious forays into single player design. I'm most interested in how the systemic nature of games lends itself to creating games with endless learning potential - multiplayer games typically create this property more easily than single player games because the presence of another player creates another interacting system and source of uncertainty, as well as providing a theoretically limitless scaling difficulty. Given a deep enough game - there will always be someone better than you. Single player games are able to achieve this as well, if there is sufficient variety and high (or no) cap to achievement. The roguelike genre I think does this well, with procedurally generated content and scaling difficulty. Deckbuilding games, from CCGs like Magic to self-contained euro games like Dominion, provide some properties that I think lend themselves well to deep, but accessible systems. The deck produces a wide range of randomized situations, but in a way that you can constrain and control by altering the composition of the deck. A limited hand size constrains the player's decisions at any given time - you can only play the cards in your hand that turn, cutting down on analysis paralysis that can come with overwhelming amounts of options. Yet a large variety of options is still available in the game as a whole, with the cards left in your deck and the pool of cards that could be added to the deck. Deckbuilding mechanics also lend themselves well to the roguelike genre, because they are naturally procedural and provide a neat analogue to player progression. Rather than leveling up or acquiring new gear, the player can just add and remove cards from their deck, which becomes a representation of their character's abilities.

The decision to combine the movement across the map with the card-based combat was an attempt to better enmesh the two systems. I'm always looking for ways to more closely intertwine systems in order to produce more emergent interactions . It always slightly bothers me when a game has a lot of self-contained systems, or systems with only very limited connections between them. It often seems like there is more opportunity for a deeper, more interwoven, cohesive whole.

NOTE: Development on this game is currently on hold - a potentially significant rework may be in the works at some point.

This was great and I had an absolute blast for a couple of hours! I don't think attack cards fall of power - after some tries, strategy with Bloodlust being only card for moving was viable but still exciting. I still had fun after I believe forty levels, thanks to dynamic situation on board (many times I barely escaped level with 1 HP). Could use some new cards on later levels, but I think it's really good game as it is

Hey! Thanks so much for playing, so glad you enjoyed it! I meant to come back to it at some point, as you mention it's not really fleshed out for the later levels in its current state. I've lost momentum in working on my personal projects, but I'm trying to get back in the rhythm. Probably won't end up coming back to this game exactly, but it's definitely the type of game want to make more of. Thanks for the bit of motivation!

Had a lot of fun playing this. Good overall system design, whereby you really had to play and test things out to work out which cards were good. After i felt i had seen all the cards and the game difficulty was not pushing me to innovate i put the game down (i was on on level twelve).

Some balance suggestions *(2-5-18 update) you can take or leave:

-toolkit is problematic since it is a draw card which pays for itself (draw two lose two) essentially allowing you to play as if you had a much smaller deck
-all attack cards fall off in power level very soon- because so many monsters spawn in the later game it is very poor tempo to try and defeat them (the only seemingly viable attack is the one which turns them into grass, cool card design)

Hey, thanks so much for playing and for the feedback!

Yeah, the game is not really balanced well for later levels particularly, and there's not nearly enough content to keep things interesting for very long.

I ended up suspending work on this version for a while, but I'm now in the process of rebooting it from scratch with some new  structure (for instance, with a resource cost for playing cards so you don't get stuff like toolbox where there's no reason not to play it). If you're interested, I can send you access to a build when it's in a more testable state (it's still in a pretty early stage but it's getting there, maybe in a couple weeks or so), I'd love to get your feedback on it!

Hey, thanks for the response, i'd happily play an early build.

How's the gamedev going? Still keen to play another build. 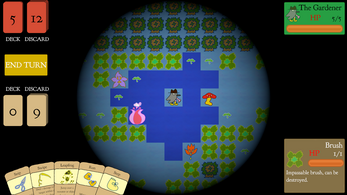